How to visualize 14.5 trillion dollars in Federal Debt

This image is in one hundred dollar bills... 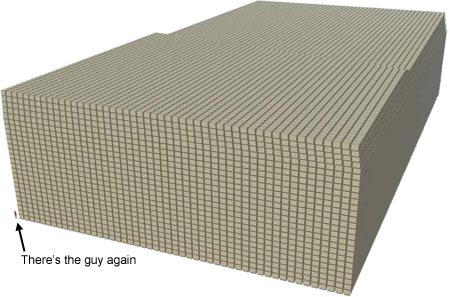 Comment Now
Follow Comments
On Friday, the Bureau of Economic Analysis released its third estimate of real gross domestic product for the second quarter of 2014 — covering April, May and June of this year. The release showed output in the U.S. increasing at an annual rate of 4.6%. This is relative to the first quarter when real GDP declined a sharp 2.1%.
The revision is up from BEA’s 4.2% second estimate released last month as well as its 4% advance estimate out in July. The revision, BEA said in a release, was largely due to a larger than previously estimated increase in nonresidential fixed investment and exports. Of the revision the BEA wrote, “The general picture of economic growth remains the same” as when it released the second estimate.
The 4.6% growth in real GDP reflected growing personal consumption, private inventory investment, exports, both residential and nonresidential fixed investment, as well as local government spending. The gains were partially offset by an increase in imports, which negatively impact GDP, and a 0.9% decline in federal government expenditures.
“Given the partial indicators in between the second and third estimate this was broadly anticipated but that doesn’t dull the good news,” Jeremy Lawson chief economist at Standard Life Investments. He also noted that consensus was for the upward revision to be driven by growth in personal consumption but the real driver was fixed business investments with 9.7% growth. This, Lawson says, is a strong sign for future growth and critical for productivity. At the same time the 2.5% personal consumption growth was slightly lower than anticipated but “not a disappointment.”
The price index for gross domestic purchases — which measures prices paid by U.S. residents — increased 2%, up slightly from the prior estimate and compared to 1.4% growth in the first quarter. Real personal consumption expenditures increased 2.5%, keeping with the second estimate and up from the 1.2% increase in the first quarter.
The BEA now estimates second quarter corporate profits increased $164.1 billion, compared to a $201.7 billion decrease in the first quarter. Taxes on corporate income increased $45.7 billion in the second quarter, compared with an increase of $66.9 billion in the first.
The S&P 500, Dow Jones Industrial Average and Nasdaq Composite were all in the green following the pre-market release pushing higher upward momentum seen earlier in the day.
BEA — a division of the Department of Commerce – will release its advance estimate of Q3 GDP estimate on Thursday, October 30.
0 comments