One in Five U.S. Workers Laid Off in Last Five Years, Report Says

One in Five U.S. Workers Laid Off in Last Five Years, Report Says

One in five U.S. workers, nearly 30 million people, say they were laid off from their jobs in the last five years, according to a new survey that highlights lasting scars from the spike in U.S. long-term unemployment following the last recession.
While the extent of long-term joblessness has been discussed widely, including by top Federal Reserve officials, the survey from the John J. Heldrich Center for Workforce Development at Rutgers University could add fuel to the debate over how much of the problem can be dealt with through better economic policy.
The report finds that losing one’s job, even for a short period, can be more than just a temporary setback.
“Laid-off workers who found another job seldom improved their financial situation,” the report said. “Two-thirds said their new jobs either paid less than their previous one (46%) or paid the same (21%).”
Just a quarter of laid-off workers say their next job was a step up from their last. One in five workers laid off during the preceding five-year period never found another job. And some two-thirds of adults in the Rutgers survey, including those who kept their jobs, said the recession a negative impact on their standard of living.
This deterioration in household finances has led to a broad reassessment of how long Americans will need to keep working in order to survive as they get older. Half of 45- to 59-year olds said they now expect to retire later than they had planned.
U.S. long-term unemployment has been falling, but it remains quite elevated by historical standards. 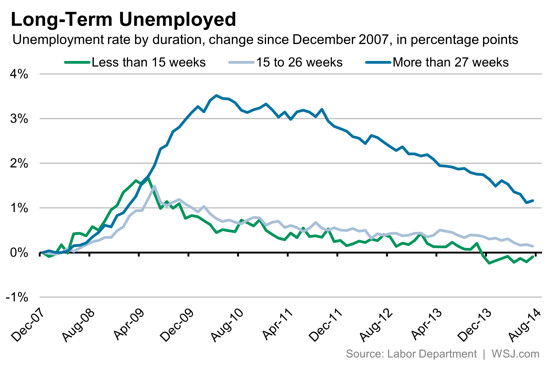 The problem cuts across income brackets and educational attainment, the survey found.
“Long-term unemployed workers are represented in all age categories, educational levels, regions of the nation, and income strata,” the survey said.