The survey illustrates how the lengthy period of high unemployment is trickling through the economy, forcing consumers to either cut back or stop paying bills all together. The U.S. unemployment rate, which fell slightly to 9.4% in December, has exceeded 9% for 20 straight months, the longest such streak on record.

Unsurprisingly, unemployed Americans between 30 and 49 years old are bearing the worst of the burden, as younger adults have fewer obligations and older adults may have had the opportunity to accumulate savings. More than a third of the unemployed in that middle category say they are falling behind financially, compared to 22% of younger adults and 19% of those between 50 and 64 years old, Gallup says.

The U.S. economy finally seems to be recovering. In the fourth quarter, consumers reopened their wallets and manufacturers slashed inventories, indicating they're getting ready to ramp up production of more goods this year.

The GDP figures released by the government Friday for the last quarter contained a number of surprises: Consumer spending was up a strong 4.4% on annualized basis, and final sales -- that's GDP without inventories -- surged ahead 7.1%, its largest jump in nearly 30 years.

"The pace of consumption is phenomenal, but no one should expect this to be maintained," says Tom Porcelli, chief economist for RBC Capital Markets in New York. He says spending is likely to average 3% for the year because job growth remains relatively modest. But Porcelli says the report was especially encouraging because it showed growth across the board, with a boom in auto sales contributing 0.9% to GDP, and nondurable consumer goods adding 0.8%.


Trade was also a big contributor to the economic gains, with exports surging 8.5% and imports declining 13.6%.

"Our exports continue to move long at a fairly robust pace, thanks to economic activity taking place outside our borders," Porcelli says. "That's providing a nice boost to our economy."

Restocking of Lean Inventories Is Likely

Inventories showed one of the most striking changes: They had ballooned by $121 billion in the third quarter, but only rose by $7 billion in the final three months of the year.
"That should leave businesses in a position of lean stocks again heading into the new year, so that production is likely to ramp up, both to fulfill firming demand and replenish depleted warehouses and shelves," says Stephen Stanley, chief economist at Pierpont Securities in Westport, Conn. In his opinion, the low inventory numbers are likely to create a flurry of upward revisions in GDP estimates for the first quarter.

The current consensus average among economists places first-quarter 2011 GDP growth at 3.25%. Stanley thinks the actual growth number will be more like 3.5% to 4%. "I expect business investment in equipment and software to surge in the first quarter a pent-up capital outlays are unleashed," he adds.

While 2011 isn't going to be a "blowout" for the economy, according to Porcelli, growth should be healthy throughout the year. And if consumers can keep spending at the fourth quarter's pace, it may even surprise to the upside.
See full article from DailyFinance: http://srph.it/fH80ze
0 comments

Economy Grew at 3.2% Pace in Fourth-Quarter

he economy gained strength at the end of last year as Americans spent at the fastest pace in four years and U.S. companies sold more overseas. The growth is boosting hopes for a stronger 2011.

The Commerce Department reported Friday that growth rose to an annual rate of 3.2 percent in the October-December quarter. That's better than the 2.6 percent growth in the previous quarter. And it was the best quarterly showing since the start of last year.

The economy has now consistently picked up speed since hitting a rough path in the spring.

For all of last year, the economy grew 2.9 percent, the most since 2005. It was an improvement from 2009 when the economy suffered its worst decline in more than 60 years.

Increased consumer spending was a key reason the economy grew more strongly. Americans boosted their spending at a 4.4 percent pace, the most since 2006. They spent more on furnishings, appliances, cars and clothes.

That's largely why economists are more optimistic about the economy's performance this year. Consumer spending accounts for roughly 70 percent of overall economic activity.

After the recession ended in June 2009, consumers kept spending cautiously. At the end of last year, though, that began to change.

Looking ahead, economists expect consumer spending will rise 3.2 percent or more for all of 2011. That would be almost double last year's anemic rate.

Against that backdrop, economists are hopeful that consumers can once again be counted on to power the economy, especially as other bracing forces like government stimulus fade.

Stronger sales of U.S. exports to foreign buyers was another major force helping the economy at the end of last year. Exports grew at a 10 percent pace, up from a 5.8 percent pace in the July-September quarter. Economists expect sales of exports to continue to provide support for the economy this year.

Government spending, however, stopped being a source of growth for the economy at the end of last year. It dipped 0.6 percent in the October-December quarter - the first drop since the start of 2010. The pullback reflected cuts in spending by the federal government on defense and by state and local governments, which are struggling with budget problems. Federal spending on non-defense projects, however, grew.
0 comments

The attached article touches on some very concerning points:

-  Is there reason to be concerned that corporate margins / profits will be squeezed, threatening the stock market
-  What are the limitations of the CPI measure, and is it a complete measure of household inflation

Most Prophets Who Called the Meltdown Haven't Scored Well Since

Social Security Is in Far Worse Shape Than You Think

According to CNBC, the Federal Reserve will turn over a record $78.4 billion to the U.S. Treasury Department as securities portfolios generated larger than expected profits in 2010.  The remittance to Treasury for 2010 is $31 billion more than a year earlier.  "The increase was due primarily to increased interest income earned on securities holdings during 2010," the Fed said in a reference to portfolios that have been fattened by buying that is designed to stimulate a slow-paced recovery.
0 comments

U.S. adds fewer jobs than expected, but unemployment rate falls to 9.4% in December

The U.S. economy added a less-than-expected 103,000 jobs in the final month of 2010, but the nation’s unemployment rate fell to 9.4% and touched the lowest level in a year and a half, the Labor Department reported Friday. 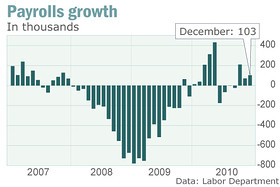 Here is an interview with the legenday Princeton professor regarding the upcoming new edition to "Random Walk Down Wall Street".

With all the talk about bailouts, budget deficits, and deficits, it is helpful to have a visual illustration of the size of the numbers were dealing with.  Here is a fun way to illustrate it.

Reuters
As Republican lawmakers threaten a showdown over the federal debt limit, bond investors are calculating when they should start to get nervous. The answer: early March, and probably, really worried in April.
Wall Street economists, looking at recent seasonal spending and revenue trends, estimate the $14.3 trillion debt limit will be reached toward the end of March or sometime in April if Congress fails to raise it before then.
Hitting the limit could force shutdowns of federal offices, as happened in 1995, threaten payments for Social Security and other federal benefits, or even cause a default on federal debt payments.
"Bondholders don't like excitement. They like to be paid and do not like to read a lot of stories about possibly not getting paid," said Lawrence Dyer, head interest rate strategist at HSBC Securities in New York.
An effective default — the worst-case scenario — would cause long-term damage to U.S. access to debt markets, Dyer said, costing the United States its prized AAA credit rating and raising borrowing costs significantly, adding to budget problems.
No one is predicting that things will go that far, but Rep. Paul Ryan, the new chairman of the House Budget Committee, said on Wednesday that he is not interested in raising the debt limit without "concessions on spending."
Obama administration officials in recent days have issued stern warnings to Republicans against "playing chicken" with U.S. debt market credibility.
"The impact on the economy would be catastrophic," White House economic adviser Austan Goolsbee warned on Sunday.
As of Tuesday, the U.S. public debt was $332.6 billion below the debt limit. The Treasury Department has forecast net new borrowing of $431 billion in the current quarter and is averaging about $21.8 billion in monthly interest payments on federal debt so far this fiscal year.
Many factors will affect when the debt limit is reached, including tax collections and sales of assets acquired in taxpayer-financed bailouts of distressed firms.
January is typically a strong month for corporate tax collections, and stronger-than-expected profit growth could boost revenues.
However, Zach Pandl, a Nomura economist in New York, added that recently enacted tax cut extensions and investment credits could delay filings as firms sort through the changes.
Delaying a Reckoning
The Treasury has a long list of tools it can employ to stave off a debt ceiling breach, but analysts say these would likely only delay its day of reckoning by weeks, not months.
The first step to be taken will be to draw down the Federal Reserve's $200 billion Supplementary Financing Program, a pool of money created during the financial crisis to fund emergency lending programs that is seldom used.
This would likely start by mid-February because it would be accomplished by not issuing new 56-day cash management bills used to fund it as they mature. As a result, it would take nearly two months to reduce the fund to zero and shift that borrowing capacity to other purposes.
In September 2009, before the last two debt limit increases in December 2009 and February 2010, the Treasury drew down the Fed program from about $200 billion to $15 billion — a move that was expected to buy about six weeks of new federal borrowing.
The Treasury also had to resort to emergency measures to stay under the debt limit in 2006 and 2007. In both cases, it halted sales of State and Local Government Series securities to municipal bond issuers.
In the February 2006 showdown over raising an $8.2 trillion debt limit – a move opposed by then-Senator Barack Obama — the Treasury dipped into two government pension funds.
"My impression is that the market right now probably sees this as noise that will eventually be sorted out," said Alec Phillips, a Goldman Sachs analyst in Washington.
"But it remains to be seen what type of increase they do, whether it's a large increase that kicks it a year or two down the road, or something smaller that brings it all back up again later this year," he added.
Even a partial government shutdown does not necessarily mean that essential functions such as national defense and debt payments will be suspended, noted Nomura's Pandl.
Nonetheless, it could be enough to roil debt markets, which are hungry for signs of longer-term U.S. fiscal discipline.
"If they can't agree on a debt limit increase, it sends a worrying sign for the two sides coming together and dealing with pressing budget issues," Pandl added.
Copyright 2011 Thomson Reuters. Click for restrictions.
URL: http://www.cnbc.com/id/40941361/